Farmers’ Protest: Rail Roko Agitation Announced by Farmers’ Body in Punjab From September 24 to 26 Against Three Agriculture Ordinances by Centre 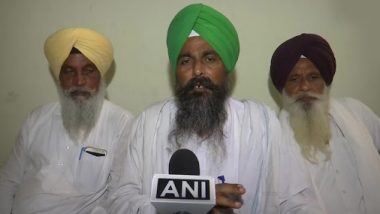 Chandigarh, September 18: A farmers' body in Punjab announced that it will hold a 'rail roko' agitation from September 24 to 26 and intensify their protest against the three farm-related Bills by the Centre. Sarwan Singh Pandher, General Secretary, Kisan Mazdoor Sangharsh Committee in Punjab said that the decision was taken to protest against the three agriculture ordinances by the government. Reports inform that different farmer organisations in Punjab have already given a call for a bandh on September 25 in protest against the Bills. Farmer Bills: What Are The 3 Legislations Brought by Modi Government? Why Are Farmers Protesting? Know All About These.

Farmers have expressed fear and concerns that the legislations will pave a way for dismantling of the minimum support price (MSP) system and they will be at the mercy of big corporates. In August, the Punjab assembly had passed a resolution, rejecting the ordinances introduced by parliament earlier and replaced by the three Bills.

On Thursday, Union Agriculture Minister Narendra Singh Tomar urged opposition parties not to politicise the agriculture-related bills aimed at boosting the income of farmers and said minimum support price (MSP) will stay. Adding further, Tomar said that the farm-related bills will revolutionise the lives of farmers as the farmers were 'chained' to agriculture markets but now they will have the freedom to sell their produce.

(The above story first appeared on LatestLY on Sep 18, 2020 08:36 AM IST. For more news and updates on politics, world, sports, entertainment and lifestyle, log on to our website latestly.com).