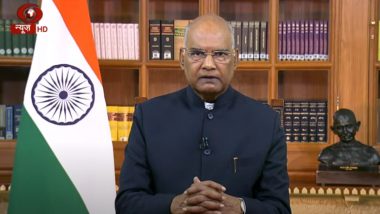 Pune, May 27: President Ram Nath Kovind on Friday said the Ganesh festival has made invaluable contribution to national politics and emerged as a source of nationalism and social harmony during the British rule.

"The Ganpati temple and Datta temple have given a new energy to the city. Apart from being the founder of Ganpati temple, Dagadusheth was also closely associated with Lokmanya Tilak in celebrating Ganpati festival. The festival has made an invaluable contribution to our national politics. It had emerged as a source of nationalism and social harmony against the British rule," the president said. President Ram Nath Kovind to Start 3-day Visit of Madhya Pradesh.

Kovind in his address said that Pune had been home to several prominent personalities, who contributed to the country. Pune was the first place to have schools for girls, while the first woman doctor from the country Anandibai Joshi also belonged to the city and former president Pratibha Patil was also from the region, he said.

Talking about his recent visit to Jamaica, Kovind said, "To respect Indian values, a road in Jamaican capital Kingston was named after Dr Babasaheb Ambedkar. I inaugurated Ambedkar Avenue there during my recent visit."