A 30-year-old woman is battling for life in hospital after she allegedly fell from the balcony of her ninth-floor flat in Ghaziabad. 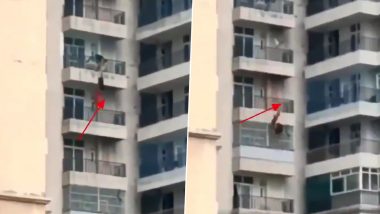 Ghaziabad, July 15: A 30-year-old woman is battling for life in hospital after she allegedly fell from the balcony of her ninth-floor flat. The incident took place at Saviour Greenisle apartments in Crossings Republik, Ghaziabad, on July 13. Police learnt about it after a chilling video of the incident surfaced on social media platforms. The woman reportedly had a heated argument with her husband prior to the fall. Ghaziabad Man Kills Uncle, His 2 Sons After They Refuse To Lend Him Money; Arrested.

The woman and her husband have been living in the flat in Crossings Republik for the past two years. According to a report, police came to know that the couple had a verbal spat on the balcony before the incident. Cops are yet to know the reason for argument and how the woman fell from the balcony. The video showed the woman hanging from the balcony. Uttar Pradesh: Power Thief’s Snake Crawl To Cut Wires Caught on Video (Watch Viral Video).

The husband was seen trying to pull her up. But, she slipped from his grasp and fell on the ground. Her husband took her to a private hospital where she is undergoing treatment. She sustained grievous head injuries and her condition is said to be critical. Police said neither the husband nor residents of the society informed them about the incident.

(The above story first appeared on LatestLY on Jul 15, 2021 01:23 PM IST. For more news and updates on politics, world, sports, entertainment and lifestyle, log on to our website latestly.com).