Ghaziabad Man Kills Uncle, His 2 Sons After They Refuse To Lend Him Money; Arrested 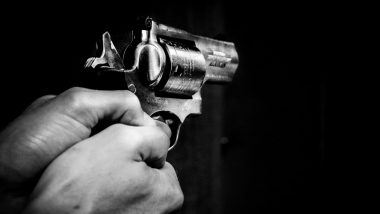 Ghaziabad, June 29: A man was arrested on Tuesday for killing his uncle and his two sons after they denied lending him money, police said. Cloth merchant Raisuddin, his sons Azharuddin and Imran were shot dead by Ayyub early on Monday while the trader's wife Fatima, who also suffered gunshot injuries, is currently hospitalised, Ghaziabad Senior Superintendent of Police Amit Pathak said.

Ayyub had asked his uncle for Rs 10 lakh as he was planning to start a business but was denied. So, the accused stayed over at his uncle's house in Toli Mohalla in Loni police station area with an intention to kill him, Pathak told media persons. Jobless Man in Delhi Kills Father, Injures Mother by Attacking With Knife After Argument Over Money.

Around 2:30 am on Monday when Raisuddin got up to attend the nature's call, Ayyub fired at him. Hearing the bullet shot, Azharuddin, Imran and Fatima rushed to the spot but the trader's sons were also shot dead. The accused then fled from the spot and was nabbed by the police later on Tuesday. He is now being interrogated, the SSP said.