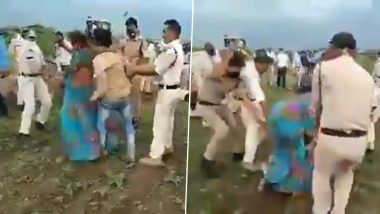 Guna, July 16: Madhya Pradesh government has ordered a Magisterial inquiry to probe the incident where a Dalit couple in Guna town consumed poison allegedly after they were beaten by police during an anti-encroachment drive. The investigation report has to be submitted in thirty days. Madhya Pradesh CM Orders Immediate Removal of Guna Collector and SP After Dalit Couple Consume Pesticide While Resisting Eviction, Video Goes Viral.

The incident took place on Tuesday when government officials and police tried to remove the couple from the government land allotted for a college in Guna city. The husband and wife first protested that their crops will be damaged and later drank pesticide. Guna Dalit Couple Beating Case: Mother of Victim Says Madhya Pradesh Police Assaulted Her Son, Ignored When He Drank Poison.

The duo is in stable condition. “Land has been allotted for college. So people, who had encroached it, were being removed. Both husband and wife consumed pesticide after which they were admitted to a hospital. Both are in stable condition,” Tehsildar N Singh said.

The opposition Congress condemned the use of force and demanded strict action against those responsible for the incident. "A Dalit couple was mercilessly beaten up by the cops. What kind of jungle raj is this?" former chief minister Kamal Nath said in a tweet.

(The above story first appeared on LatestLY on Jul 16, 2020 05:35 PM IST. For more news and updates on politics, world, sports, entertainment and lifestyle, log on to our website latestly.com).