Gurdaas Maan in a recent video on his Instagram handle apologized for his comments made on the leader of dera and Nakodar Sain Laddi Shah. He also stated that he did not say or comment anything intentionally and he respects everyone. 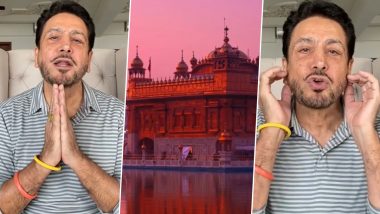 Punjabi Singer Gurdas Maan posted an apology video on his social media handle on Tuesday over a recent controversy. Maan, in a recent video mentioned that the leader of dera and Nakodar Sai Laddi Shah was descended from Guru Amar Das, the third Sikh Guru. The members of the Satkar Committee had lodged a police complaint against Gurdas Maan with the Nakodar police.

Following the stir, Gurdas Maan released a video on his Instagram handle apologising for his comments made on Baba Laddi Shah. He also stated that he did not say or comment on anything intentionally and he respects everyone. He admitted to giving out the statement but also justified himself saying that by saying so he was not comparing the leader to Guru Nanak. He also apologised for hurting the sentiments of the people.

The singer made the controversial comments at a fair organised in Nakodar. The Satkar Committee members, as quoted by Tribune India, asserted that this could be a part of Gurdas Maan’s planned strategy aiming to "hurt the sentiments of the Sikh community."

(The above story first appeared on LatestLY on Aug 24, 2021 03:33 PM IST. For more news and updates on politics, world, sports, entertainment and lifestyle, log on to our website latestly.com).