At least six people are feared dead while around 67 persons have been injured after 12 coaches of Guwahati-Bikaner Express derailed in Domohani area in West Bengal's Jalpaiguri district on Thursday afternoon. 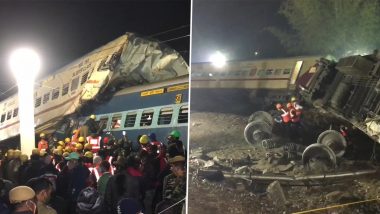 Kolkata, Jan 13: At least six people are feared dead while around 67 persons have been injured after 12 coaches of Guwahati-Bikaner Express derailed in Domohani area in West Bengal's Jalpaiguri district on Thursday afternoon.

Prime Minister Narendra Modi, who was chairing a virtual meeting with the chief ministers on the Covid situation at the time of the accident, took information about the mishap from West Bengal Chief Minister Mamata Banerjee. Guwahati-Bikaner Express Derails Near Domohani in West Bengal.

Maynaguri was not one of the train's 34 stoppages' list and the Bikaner Express was merely passing Jalpaiguri at the time of the incident.

The Indian Railways said that 12 coaches have been affected, adding that the DRM and ADRM have rushed to the site along with the accident relief train and medical van. According to railway authorities, 4 of the 12 coaches have been fully damaged and the rescue teams, including that from NDRF and BSF, are trying to cut open the coaches with gas cutters.

"If there are people inside the fully-damaged coaches, the number of deaths will increase. One coach is reported to have fallen into the water. We are trying to find out the condition of the coach. It has become dark, so the rescue operation is getting delayed," a senior railway official said.

As per sources, there were around 1,200 passengers on board the ill-fated train.

"Deeply concerned to hear about the tragic accident of the Bikaner-Guwahati Express in Maynaguri. Senior officers of the state government, DM/SP/IG North Bengal are supervising rescue and relief operations. Those injured will receive medical attention as early as possible," Banerjee said.

"Spoke to GM @RailNf and gathered that all efforts are afoot to render assistance to injured and passengers in concert with agencies @RailMinIndia @MamataOfficial. Passengers would be taken to Guwahati by another train. Pray speedy recovery to injured," West Bengal Governor Jagdeep Dhankhar tweeted.

Vaishnaw, who would personally visit the accident site on Friday, also apprised the Prime Minister of the whole situation.

Meanwhile, the railway authorities have announced a compensation of Rs 5 lakh for the deceased, Rs 1 lakh for the seriously injured, and Rs 25,000 for the injured persons.

According to the railway authorities, the reason behind the accident is yet to be determined but there was no problem regarding signal, and it is feared that the derailment took place because of some problems on the track.

"The state rescue team along with three teams from NDRF are working on the rescue operations. The injured persons are being transferred to the Jalpaiguri Super Speciality Hospital, while the seriously injured people are being sent to the North Bengal Medical College," said the District Magistrate of Jalpaiguri, Moumita Godara Basu.

(The above story first appeared on LatestLY on Jan 13, 2022 11:52 PM IST. For more news and updates on politics, world, sports, entertainment and lifestyle, log on to our website latestly.com).