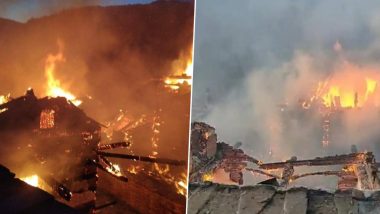 Shimla, April 29: A massive blaze broke out in Himachal Pradesh on Wednesday morning in which several houses were gutted in the fire. According to a tweet by ANI, two persons have been injured while seven houses have been completely destroyed. Reports inform that the fire broke out at Shishtwari village in Shimla's Chirgaon area of Himachal Pradesh.

The  fire fighting operation are currently underway. No loss of life has been reported in the incident so far. After receiving the information fire brigade and district, authorities reached the spot. The cause of the fire is yet to be ascentained.

Amit Kashyap, Shimla Deputy Commissioner informed that while two people have been injured in the tragic incident, one person is missing. The injured have been shifted to hospital.

On April 26, an elderly woman died after a massive fire broke out in Chirgaon area of Shimla district. The woman, who was 80-year-old woman, lost her in the blaze. The blaze, which broke out at Rohhroo town, was so massive that it also gutted 10 houses and injured a few.

(The above story first appeared on LatestLY on Apr 29, 2020 08:38 AM IST. For more news and updates on politics, world, sports, entertainment and lifestyle, log on to our website latestly.com).