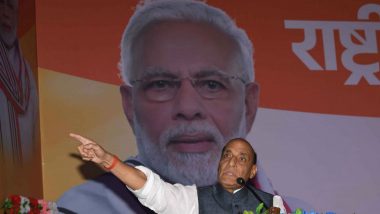 New Delhi, May 31: Defence Minister Rajnath Singh on Saturday broke his silence over brewing tensions between India and China along the Line of Actual Control (LAC) in Ladakh. During an interaction on a news channel, Rajnath Singh said India and China are communicating with each other at the military and diplomatic levels, adding that it’s not the India of 1962 which could be arm-twisted. Xi Jinping Tells China's PLA to Prepare for War, Be Ready for 'Worst-Case Scenarios' Amid COVID-19 Pandemic.

"I want to inform that talks with China are on at military and diplomatic levels. China has also expressed willingness to resolve the situation," Singh said. "India is also trying that tensions should not rise in any situation... the situation must be resolved," he added. The Defence Minister acknowledged that "some circumstances have developed on the LAC" but asserted the process to resolve it is on. India-China Border Standoff: Chinese Envoy Pitches For Dialogue, Says 'Differences Shouldn't Overshadow Relations'.

Singh reiterated that incidents happen because of the difference in perceptions of the LAC. "Nobody can deny the fact that there has been difference in perceptions about the India-China border,” Singh said, but “there is no question, and nobody can imagine that India can be arm-twisted like the situation in 1962." Reacting to US President Donald Trump's offer to mediate between India and China over border disputes, Singh said he had informed US Secretary of Defense Mark T Esper that there are established mechanisms to resolve such situations.

"Yesterday, I spoke to US Secretary of Defense. I told him we have developed a mechanism that if a problem crops up between India and China, then it will be resolved through military and diplomatic dialogues. We have that mechanism, and based on that, talks are going on," he said. His statement came in the backdrop of the continuing standoff between Indian and Chinese troops at the Ladakh border.

The nearly 3,500-km-long LAC is the de-facto border between the two countries. India has said the Chinese military was hindering normal patrolling by its troops along the LAC in Ladakh and Sikkim and strongly refuted Beijing’s contention that the escalating tension between the two armies was triggered by trespassing of Indian forces across the Chinese side.

(The above story first appeared on LatestLY on May 31, 2020 08:34 AM IST. For more news and updates on politics, world, sports, entertainment and lifestyle, log on to our website latestly.com).