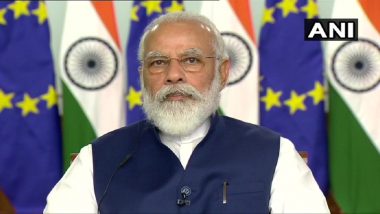 New Delhi, July 15: Prime Minister Narendra Modi participated in the 15th annual India-EU Summit, which was held virtually on Wednesday. The interaction was held via a video-conference between Modi and the two top EU representatives - Charles Michel, President of European Council, and Ursula von der Leyen, President of the European Commission.

The Indian PM called for a long-term joint strategy with the European Union to combat the twin challenges of COVID-19 and climate change. The strategy to be enacted must be action-oriented, Modi told the EU leaders during the summit. UN Report Finds 1 Out 9 People Going 'Hungry' Globally, Trends Worsening Due to COVID-19 Pandemic.

"India and EU are natural partners. Our partnership is significant for peace and stability of the world. This reality has become even more clear in the global situation today," Modi said.

"Apart from current challenges, long-term challenges like climate change also a priority for India and the EU. In our efforts to increase the use of renewable energy in India, we invite investment and technology from Europe," the Prime Minister added.

We had to cancel India-EU summit in March due to #COVID19. It is good that we are able to come together today through virtual medium: Prime Minister Narendra Modi at the 15th India-EU (virtual) summit pic.twitter.com/zV5ZBKxk5V

The India-EU Summit was earlier scheduled to be held in Brussels on March 13, but was postponed in view of the coronavirus outbreak. With the threat arising from the pandemic yet to subside, the European amalgam and New Delhi decided to hold the conference virtually.

India had drawn condemnation from some EU Parliament members last year, when it had scrapped the semi-autonomous status of Jammu & Kashmir, and converted the state into a union territory. The Union members had also marked concern over the Citizenship Amendment Act (CAA) passed by the Modi government in December last year.

(The above story first appeared on LatestLY on Jul 15, 2020 05:06 PM IST. For more news and updates on politics, world, sports, entertainment and lifestyle, log on to our website latestly.com).