The Kerala High Court on Tuesday directed the Kavaratti Police of Lakshadweep to file a statement in the anticipatory bail petition filed by filmmaker Aisha Sultana in the sedition case against her. 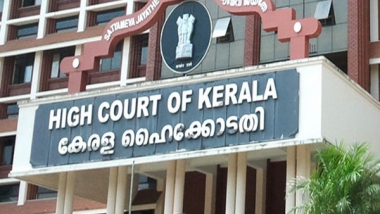 Kochi, June 15: The Kerala High Court on Tuesday directed the Kavaratti Police of Lakshadweep to file a statement in the anticipatory bail petition filed by filmmaker Aisha Sultana in the sedition case against her.

Justice Ashok Menon heard the matter today and posted the matter for further hearing on June 17.

An FIR was registered against the filmmaker by the Kavaratti police on sedition charges based on a complaint by BJP's Lakshadweep unit president C Abdul Khader Haji against Sultana for stating in a TV debate that the Centre deployed COVID as a 'bio weapon' against people of Lakshadweep. Aisha Sultana Committed A Seditious Action As Any Action To Instigate The People To Revolt.

The bail plea states, 'I made the 'bio-weapon' remark in the context of criticizing the administration relaxing the COVID-19 protocol, which led to a sharp increase of pandemic cases in the island, where there had been not even a single COVID case till January 2021. Lakshadweep is seeing an exponential rise in COVID-19 cases due to the relaxations in the quarantine protocol, and it is in this context that the alleged remarks were made.' The Case Against Aisha Sultana Should Be Withdrawn.

The plea further said that the criticism on political issues does not constitute the offence of sedition under Section 124A Indian Penal Code (IPC). 'The applicant had only intended to say that it was due to the apathetic approach and reforms of the new administrator that serious threat is being caused to the lives of the people of the Island and had absolutely no intention of exciting disaffection towards the Government,' the plea reads. Lakshadweep Based Filmmaker Aisha Sultana Approaches Kerala High Court.