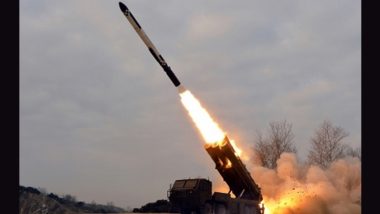 New Delhi, November 23: India on Wednesday carried out a successful training launch of an intermediate-range ballistic missile, Agni-3, from the APJ Abdul Kalam Island off the coast of Odisha.

A Defence Ministry official said that the successful test was part of routine user training launches carried out under the aegis of the Strategic Forces Command. The launch was carried out for a predetermined range and validated all operational parameters of the system, the official added. India Carries out a Successful Training Launch of an Intermediate Range Ballistic Missile.

DRDO officials said that in line with the Aatmanirbhar Bharat campaign of the Government of India, the compendium consists of more than 100 technologies, systems and products developed by DRDO for LIC operations. It is a valuable repository of information for the central security forces. North Korea’s Intercontinental Ballistic Missile Falls Into Ocean Inside Japan’s Exclusive Economic Zone.

(The above story first appeared on LatestLY on Nov 24, 2022 09:41 AM IST. For more news and updates on politics, world, sports, entertainment and lifestyle, log on to our website latestly.com).