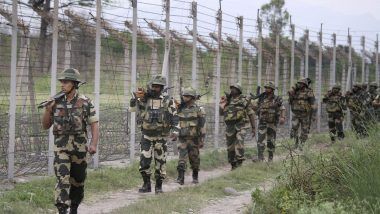 Gangtok, January 25: In an attempt to intrude into Indian territory, the Chinese soldier has tried to move towards and across the border last week, as per reports. However, their attempt was foiled by the Indian army officials. The incident reportedly took place in Naku La in the Northern Sikkim, when the Chinese soldiers tried to cross over the Indian side of the border. China Violated Bilateral Agreements, Responsible for Stand-Off in Ladakh, Reiterates India.

As per reports, a clash broke out between the Indian and Chinese army, and the Indian men successfully foiled their attempt to intrude into the country. As per sources around 20 Chinese soldiers were injured in the clash at Naku La in Sikkim. On the Indian side, four soldiers reportedly sustained injuries. Ladakh Standoff: India, China Have Reached 5-Point Consensus After Talks, Says Chinese Foreign Ministry.

The Indian men reportedly successfully retaliated to the Chinese intrusion and pushed away the neighbour army into its territory. The clash took place ahead on the ninth round of military talks between the armies over Ladakh stand off. Situation, however, remains tense at the border.

(The above story first appeared on LatestLY on Jan 25, 2021 11:26 AM IST. For more news and updates on politics, world, sports, entertainment and lifestyle, log on to our website latestly.com).