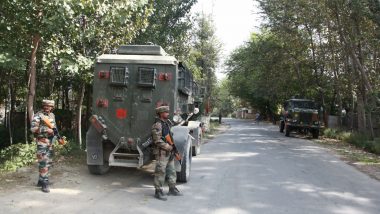 According to the police, incrimination materials including arms and ammunition were seized from the encounter site and the search operation is underway. "Pulwama encounter -- Update: 03 unidentified terrorists killed. Incriminating materials including arms and ammunition seized. Search going on. Further details shall follow," the Kashmir Zone Police tweeted. Jammu And Kashmir: Three Terrorists, Including Lashkar-e-Taiba Commander, Killed in Two Separate Encounters in Shopian And Handwara.

On Friday, a terrorist hideout was busted by a joint team of police, Army and CRPF in the Tral area of Pulwama district. The search operation was launched after security forces recieved information regarding presence of terrorists of proscribed terror outfit Jaish-e-Mohammed in Takiya Gulabagh Tral area. "During search, hideout of JeM was busted and subsequently destroyed," police said.

(The above story first appeared on LatestLY on Aug 29, 2020 08:13 AM IST. For more news and updates on politics, world, sports, entertainment and lifestyle, log on to our website latestly.com).