Jammu and Kashmir: Four Terrorists Gunned Down by Security Forces in Kiloora Area of Shopian During Encounter 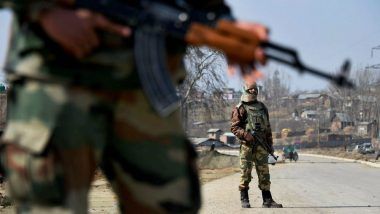 Sringar, August 28: As many as four terrorists were gunned down by security forces in an encounter in Jammu and Kashmir on Friday. According to reports, the gunfight took place in Kiloora area of Shopian district. A latest update said that a terrorist has surrendered while four terrorists have been eliminated in the gunfight. The Indian Army said two AKs and three pistols have been recovered so far. IGP Kashmir informed that Shakoor Parray, Al Badr district commander, and another terrorist Suhail Bhat who abducted and killed Khanmoh’s Sarpanch, was neutralised in the encounter today.

After specific inputs, security forces had launched a cordon and search operation in the area following information about the presence of militants there. The identity of the terrorists and group affiliation is yet to be ascertained. Reports inform that the search operation turned into an encounter after the militants fired on a search party of the forces, who retaliated strongly.

Earlier on August 22, a similar encounter broke out between security forces and militants in Baramulla district of Jammu and Kashmir. Reports inform that the security forces had launched a cordon and search operation in Check-i-Saloosa area of Kreeri after receiving specific information about the presence of militants in that area. Jammu and Kashmir: LeT Terrorist Arrested with Arms, Ammunition in Bandipora.

Prior to this, an unidentified militant was killed in an encounter with security forces in Shopian district of Jammu and Kashmir on August 19. Based on specific inputs about the presence of militants in Chitragam village of the south Kashmir district, security forces launched a cordon and search operation there, a police official said.

(The above story first appeared on LatestLY on Aug 28, 2020 05:51 PM IST. For more news and updates on politics, world, sports, entertainment and lifestyle, log on to our website latestly.com).