A multi-storeyed underground palace, of immense historical importance, has been found during excavations by the Archaeological Survey of India (ASI) at Navratangarh in Gumla district in Jharkhand. 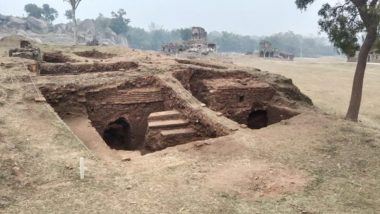 Ranchi, Dec 30: A multi-storeyed underground palace, of immense historical importance, has been found during excavations by the Archaeological Survey of India (ASI) at Navratangarh in Gumla district in Jharkhand.

The structure is believed to be around five and a half centuries old and date to the Naga or Nagavanshi dynasty.

The excavations being carried out by the ASI in and around the palace have yielded many important ancient remains. The department will carry out further studies to unravel the mysteries behind it.

Navratnagarh was declared as a heritage site in 2009 for conservation.

Shivkumar Bhagat, the Superintending Engineer of the ASI, who is supervising the excavation, says that the results of the ongoing excavation, which can go up to March 2022, can throw new light on the history of the Naga/Nagavanshi dynasty. Jharkhand CM Hemant Soren Tweets About 'Rs 25 Relief On Per Litre Petrol For Two-Wheelers' in State, Announces Implementation Date.

Navratangarh, in Chotanagpur, was the seat of power of the dynasty's 45th ruler, Durjan Sal.

Durjan Sal ruled the kingdom for the longest. According to the evidence found so far, he had built the fort here in 1571. It is said that this fort was of 9 storeys, so it was given the name of Navratangarh. The ruins of this fort have been there for years and have been an object of curiosity for local tourists, as well as archaeologists and historians.

On the basis of the structure, it is being speculated that there must have been a secret place to house his treasure of diamonds and other jewels.

King Durjan Sal, who built the Navratan fort, has been known to history as a connoisseur of diamonds and there are many stories about him concerning his expertise in the precious stones. One of these is that Durjan Sal was taken prisoner by the Mughal satrap, Ibrahim Khan, due to non-payment of tribute, and lodged in Gwalior jail but was released after 12 years due to his insightful knowledge in fine arts and jewels.

(The above story first appeared on LatestLY on Dec 30, 2021 08:48 AM IST. For more news and updates on politics, world, sports, entertainment and lifestyle, log on to our website latestly.com).