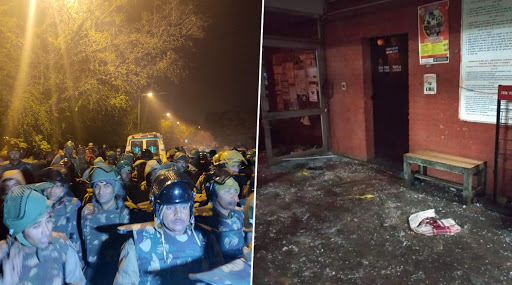 According to a tweet by news agency ANI, Delhi Police sources claim that they have jotted down 37 suspects for the violence, that erupted on the evening of January 5. The suspects have been identified by SIT, though no names have been made official as of now. JNU Violence: From Delhi Police Press Conference to India Today Sting Operation & JNUSU President Aishe Ghosh's Response; Here's All That Happened.

Earlier on Friday, India Today TV's sting operation claimed that two students -- allegedly from Akhil Bharatiya Vidyarthi Parishad -- bragged about their role in the violence. The telecast also showed the students confessing their crime and beating the students. The private news broadcaster claim that two students are from JNU and have been identified as Akshat Awasthi and Rohit Shah. Even after the videos were telecast, Delhi Police is yet to take action on the students who expressed their pride in leading the mob to the 'righjt direction'. In the video, Akshat can be seen Delhi Police is theirs and would not harm them.

However, ABVP general secretary Nidhi Tripathi denied that Akshat being a  part of their organisation. She had said, "They are not holding any position within the ABVP. Anyone participating in ABVP or JNUSU events cannot qualify to become their members automatically. Police are investigating the entire case. Anyone involved in violence at the JNU should be prosecuted. We will fully support the police in their investigation." Did Delhi Police Identify ABVP's Shiv Poojan Mandal as Vikas Patel in its Press Conference on JNU Violence? Here's What Netizens Are Saying.

Following the sting operation, India Today Managing Editor Rahul Kanwal asked Delhi Police Commissioner Amul Patnaik to do his part. He took to Twitter and wrote, "We did our job as journalists. @DelhiPolice Commissioner Mr Amulya Patnaik you should, at least now, do yours. Without fear or favour. Show some spine. Goodnight. See you all tomorrow. Jai Hind."

We did our job as journalists. @DelhiPolice Commissioner Mr Amulya Patnaik you should, at least now, do yours. Without fear or favour. Show some spine. Goodnight. See you all tomorrow. Jai Hind.

Delhi Police PRO MS Randhawa and DCP Crime Branch, Joy Tirkey held a press conference and tried to narrate the sequence of events that led to January 5 violence on the JNU campus. The Crime Branch DCP said that the investigation was based on some photographs and videos which became viral after the violence, as there is no CCTV footage available of the incident. However, no person has been detained so far. JNU Sting Operation by India Today Shows Students Claiming to be From ABVP Admitting to Role in Jan 5 Violence, Left Student Admits to Pulling Out Wires in Server Room, Guard Speaks of Delhi Police Laxity; Watch Video.

On the evening of January 5, around 50 masked men attacked the JNU students on the campus. Over 40 students, including Ghosh sustained injuries in the attack.