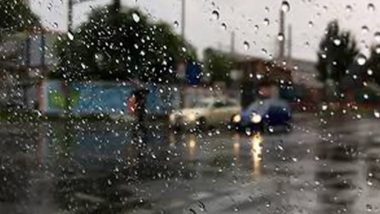 Due to the downpour, rivers have swollen, inundating agricultural fields and low-lying areas, also landslides have been reported in hilly areas of Kodagu and Dakshina Kannada districts.

A landslide at Panjikallu village of Bantwal taluk in Dakshina Kannada has resulted in the death of three persons, after four labourers got trapped under the mud on Wednesday. One person who has survived is undergoing treatment at a local hospital.

Revenue Minister R Ashoka who is stationed in Kodagu district, on Thursday visited the rain battered and landslide affected areas like Chembu village and is monitoring the relief and rescue operations there.

He distributed relief cheques to those affected, the minister's office said.

Rains have also affected normal lives in several other districts close to coastal and Malnad regions- like Shivamogga, where a holiday has been declared for schools and colleges. A couple of reservoirs in the district have reached brim with huge inflow.

Chief Minister Basavaraj Bommai on Thursday said the state government is taking all the necessary measures to rescue and provide relief to people affected by torrential rains.

"Our Revenue Minister is already in Kodagu. According to the Met Department, rains will continue for the next three to four days in Kodagu, Dakshina Kannada, Udupi, Uttara Kannada districts. I have already held discussions with the Deputy Commissioners (DCs) of districts regarding the precautionary measures to be taken and they have been taken, necessary funds are with DCs," he said.

Speaking to reporters, he said, National Disaster Response Force (NDRF) team stationed in Mysuru is being deployed in Kodagu, the team stationed in Mangaluru will remain there and take care of rescue operations in surrounding regions, while the State Disaster Response Force (SDRF) teams have been deployed in Karwar and Udupi. Weather Forecast: Heavy Rains To Continue Over Konkan Division, Goa, & Karnataka During Next 24 Hours; Red Alert in 6 Maharashtra Districts.

"DCs have been directed to take necessary measures to temporarily stop the sea erosion in Karwar, Udupi and Mangaluru. I have ordered them to personally visit the spot and monitor the work. In Kodagu and other hilly areas where landslides had taken place last time, I have asked officials to evacuate people staying nearby, also to clear the roads," he added.