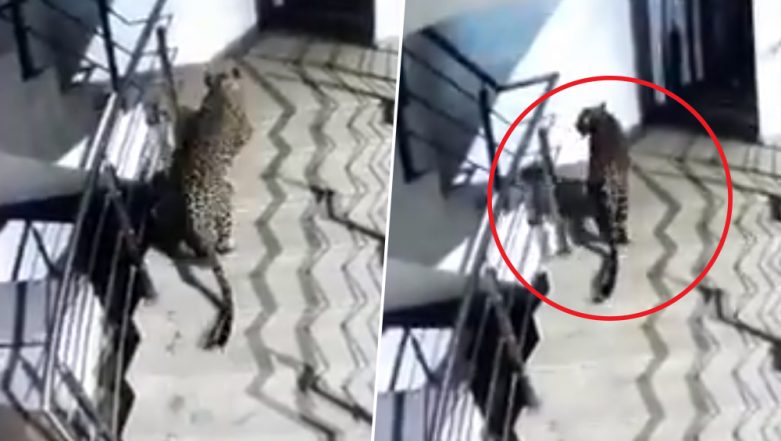 Mumbai, February 20: A leopard was spotted taking a walk in Thane's famous Korum Mall on Wednesday morning, causing panic among residents in the city. According to visuals captured by the CCTV camera, the leopard was seen straying in the mall and then moving to the exit gate of the parking area. Police and the forest department team were alerted soon after and search operation to find the leopard is currently underway. According to a report by Mumbai Mirror, a police official of Vartak Nagar area was quoted saying that the wild cat was spotted in the mall around 5.30 am on Wednesday. Leopard Cub Found Sleeping Next to Kids in Maharashtra's Nashik House.

Reports inform that the leopard is believed to have entered the mall after scaling the walls. Alert has been sounded in surrounding areas including the Hotel Satkar residency and Singhania school as the leopard was seen leaving the nearby Korum Mall and moving towards the city.  Leopard Spotted in Aurangabad's Khuldabad Ghat by Car Passengers? Video of Wild Cat Goes Viral.

CCTV footage of a leopard who has entered a hotel in Thane. pic.twitter.com/XyOgYvxoJs

Here's another video of the Leopard seen straying in Korum Mall:

Several incidents of leopard straying across the city have been reported over the last few months. Leopard sightings are not surprising in Thane area as it is close to Sanjay Gandhi National Park and adjacent to the forest patch.