A physically-challenged utensil trader and his mother were looted by three masked miscreants at gunpoint at their house in Napier Colony in the Thakurganj police station area here. 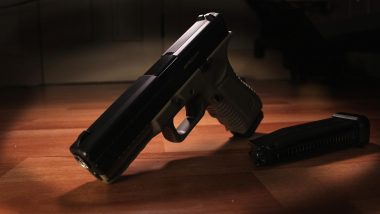 Lucknow, Dec 2: A physically-challenged utensil trader and his mother were looted by three masked miscreants at gunpoint at their house in Napier Colony in the Thakurganj police station area here.

Police teams were working on the case and looking for the footage of the robbers to reach them. Lucknow Shocker: Man Killed by Friends for Stealing Android Tablet To Buy Drugs in UP; Accused Held.

Police suspect some local resident may have worked as an informer for the robbers and helped in executing the crime.

According to the police spokesman, the trader Ashwini Rastogi, 45, of the Napier Road Colony was at home due to the weekly closure of his shop on Thursday in Aminabad.

Ashwini had gone to the temple to offer puja, while his mother Rajkumari, 75, was at home. Ashwini's wife died in 2016 while his father died in 2019. Uttar Pradesh: Warrants Against 16 To Thwart Hanuman Chalisa Call at Shahi Eidgah Mosque in Mathura on December 6.

"Taking advantage of Rajkumari being alone at home, the miscreants with their faces masked entered the house and held her at gunpoint. About 15 minutes after this, Ashwini returned home and the robbers held him at gunpoint and also trained a knife on him. They tied up Ashwini and his mother with a rope and then dragged them to a room. The miscreants collected the ornaments and cash from the almirah and fled the scene," the police said.

The victim then contacted his brother-in-law and then informed the police about the incident.

"They thrashed both of us when we cried for help. They looted about Rs 3 lakh in cash and all the ornaments we had with us," Ashwini said.

(The above story first appeared on LatestLY on Dec 02, 2022 11:03 AM IST. For more news and updates on politics, world, sports, entertainment and lifestyle, log on to our website latestly.com).