A pregnant woman was tied to a rubber tube to cross a river to reach a hospital in Madhya Pradesh's Harda district. A video of the incident surfaced on the social media. 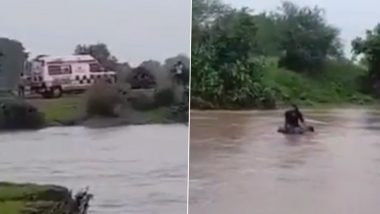 Bhopal, Aug 18: A pregnant woman was tied to a rubber tube to cross a river to reach a hospital in Madhya Pradesh's Harda district. A video of the incident surfaced on the social media.

The nine months pregnant woman, who lives in a remote village, had to reach a hospital as her labour pains began. The family members had no option but to put the life of the woman at risk to cross the river.

Due to heavy rain, road connectivity from the village was disrupted and the van to take the woman to a hospital was stuck on the other side of the river. The family members somehow managed to take the woman across the river on a rubber tube. From there she was taken to a hospital in an ambulance. Karnataka Shocker: Principal, President and Lecturer of Private College in Dharwad Sexually Exploit Girl Students, FIR Lodged

Later, the woman delivered a boy and as per the doctors in Harda district hospital, both the mother and child are healthy. District health officer H. P. Singh said the woman was first made to sit on a tube and cross the river. Thereafter, a 108 ambulance brought her to Harda. Here the woman gave birth to a son in the hospital. Mizoram Shocker: Intoxicated Man Thrashes Wife Accusing Her of ‘Consuming Liquor’, Arrested After Video Goes Viral

This happened three days after the body of a deceased person was floated on a rubber tube due to the absence of the connecting bridge over a river in Madhya Pradesh's Anuppur district.

Meanwhile, another video surfaced on social media showing two bodies being carried on motorcycles allegedly due to non- availability of a hearse van. The incident was reported from Damoh district of the state. Such incidents have become routine in the state where people have to carry bodies either on bikes or cots. In the last three months, nearly half a dozen such incidents were reported from different parts of the state.

(The above story first appeared on LatestLY on Aug 18, 2022 06:23 PM IST. For more news and updates on politics, world, sports, entertainment and lifestyle, log on to our website latestly.com).