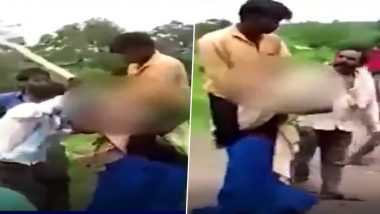 Jhabua, July 30: In a shocking incident from Madhya Pradesh, a woman in a tribal-dominated village in Jhabua district was forced to carry husband on her shoulders after her husband accused her of having an affair. The woman was also beaten by villagers. After the clip went viral on social media platforms, a case was registered. Reportedly, the incident took place on Tuesday evening.

The clip shows a woman beaten by villagers as she struggles to walk while carrying her husband on the shoulder. The video further shows kids laughing at woman, while others recording video of the criminal act. Madhya Pradesh Woman Forced to Carry Husband As ‘Punishment’ by Jhabua Villagers for Alleged Affair With Man Outside Her Caste; Watch Video.

#Breaking | Watch: A shocking incident of moral policing has been reported from Jhabua, Madhya Pradesh. A woman was forced to carry her husband on her shoulders after an alleged illegal affair came to light. pic.twitter.com/TpdJi2kf1i

Taking cognizance of the matter, woman's husband and six villagers have been booked by Jhabua Kotwali Police. Woman and her husband, who are daily wage worker in Gujarat, returned to their village recently. The husband allegedly told his family that his wife is having an extramarital affair. Following which, they decided to punish her.

This is not the first time, a similar incident was reported from Devigarh village in Jhabua district last year. In that incident too, the woman was forced to carry husband on her shoulder after he accused her of having an affair with a man belonging to another caste.

(The above story first appeared on LatestLY on Jul 30, 2020 05:56 PM IST. For more news and updates on politics, world, sports, entertainment and lifestyle, log on to our website latestly.com).