Malls to Remain Shut in Gurugram, Faridabad; No Order Received on Re-Opening of Malls in Delhi And UP, Says DLF 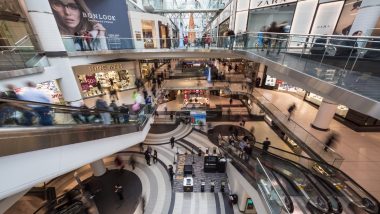 Gurugram, June 6: Haryana Deputy Chief Minister Dushyant Chautala on Saturday announced re-opening of malls across the state, expect in Gurugram and Faridabad, from June 8. It simply means shopping malls will remain shut in Gurugram and Faridabad. The Haryana government also allowed re-opening of places of worship across the state from June 8. No religious gatherings, however, will be allowed. #Unlock1: Religious Places, Hotels, Restaurants, Malls to Open from June 8.

Shopping malls and religious places are shut across India since March 25 when Prime Minister Narendra Modi had announced a nationwide lockdown to contain the spread of coronavirus. However, as part of the Centre's Unlock 1 plan, states can re-open malls and religious places from June 8. "In Phase I, religious places and places of worship for public, hotels, restaurants and other hospitality services, and shopping malls will be permitted to open from June 8, 2020," the Centre had said. Unlock 1: Health Ministry Issues SOPs For Malls, Religious Places, Private Offices, Hotels And Restaurants; Idol Touching Not Allowed, Social Distancing Norms Mandatory.

No Order Received on Re-Opening of Malls in Delhi And UP, Says DLF

The Union Ministry of Health and Family Welfare has also issued guidelines ahead of re-opening of malls and religious places. According to the guidelines, only asymptomatic customers will be allowed with masks and entrances will have sanitiser dispensers and thermal screening at shopping malls. Shopping malls in containment zones will remain closed, and only those outside containment zones will be allowed to open up.

Places of worship will not allow entry of senior citizens and other high-risk categories, are urged to have separate entry and exits and touching of idols or holy books will not be allowed, as per the Standard Operating Procedures issued by the Health Ministry.

(The above story first appeared on LatestLY on Jun 06, 2020 08:16 PM IST. For more news and updates on politics, world, sports, entertainment and lifestyle, log on to our website latestly.com).