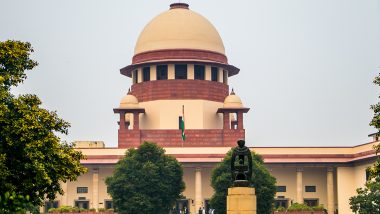 New Delhi, August 18: The Supreme Court on Thursday set aside a divorce decree granted in favour of a husband, saying that marital status is important for women in India given the social situation here. The counsel, representing the husband, said his client has become a "sadhu", and he cannot get back into the marital relationship with the wife.

A bench comprising justices U.U. Lalit and S. Ravindra Bhat told the husband's counsel: "If you have renounced the world, you have renounced everything, right?" The bench further added: "We will set aside the divorce decree. To you it will make no difference." The top court was considering an appeal by the wife challenging a divorce decree granted by the high court on the ground of desertion.

Advocate Purushotam Sharma Tripathi, representing the wife, submitted that the high court had specifically noted that the husband had not suffered any cruelty and she had not left her in-laws' place on her own. He further argued that the high court should not have passed the decree for dissolution of marriage. Dolo-650 Makers Spending Rs 1,000 Crore As Freebies On Doctors for Prescribing Tablet: Supreme Court Told.

The bench noted that the couple have been living separately over a decade now, and it might be impossible for them to live together again. However, the top court said against the backdrop of the way society treats women, the concept of marriage and marriage status is quite important. Pointing at the social situation in the country, it said: "There's a lot of importance to marriage for women."

The husband's counsel told the bench that his client had already paid Rs 5 lakh amount to the wife as per the High Court's direction. Justice Lalit said: "Let her enjoy that... as some kind of ex gratia payment. She has not made any other demands."

The top court was told that the high court allowed the divorce under the irretrievable breakdown theory of marriage, as the parties were living separately. The husband's counsel proposed mediation between the parties. However, the top court did not entertain this submission. The bench said it cannot force the parties, but "let her have the status of being a married woman". SC Orders Status Quo on Sports Body Plea Challenging Appointment of CoA.

(The above story first appeared on LatestLY on Aug 18, 2022 09:12 PM IST. For more news and updates on politics, world, sports, entertainment and lifestyle, log on to our website latestly.com).