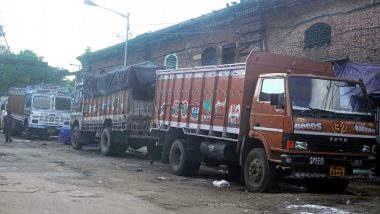 Lucknow, September 9: With the imposition of the new Motor Vehicles Act 2019, heavy fines have already caused an uproar across the nation. In the latest, the truck drivers in Uttar Pradesh can face a hefty fine for wearing the comfortable attire 'lungi' and 'banyan'. Drivers and their helpers of all commercial vehicles can face a fine up to Rs 2,000 if caught wearing lungi and banyan (vest), News18 reported. Motor Vehicle Amendment Act 2019: People Wearing Slippers While Riding Motorbike to be Fined? Some Reports Say So But No Official Confirmation.

This development comes under the new provisions of the Motor Vehicle Act, which dictates that drivers should wear full-length pants paired with a shirt or a t-shirt, News18 reported. The new provision also directs school bus drivers to wear the uniform. Motor Vehicle Act 2019: Nitin Gadkari Fined for Over-Speeding on Bandra-Worli Sea Link in Mumbai.

Speaking to media, ASP (Traffic) Lucknow Poornendu Singh said that dress code has been part of the Motor Vehicle Act since 1939. When the act was amended in 1989, a fine of Rs 500 was introduced. However, it was not properly implemented.

"A fine of 500 rupees was introduced when the Act was amended in 1989 for violation of the dress code. Now a fine of 2000 rupees will be imposed under section 179 of Motor Vehicle ACT 2019 on those who will be found violating the dress code," Singh told News18.

(The above story first appeared on LatestLY on Sep 09, 2019 07:45 PM IST. For more news and updates on politics, world, sports, entertainment and lifestyle, log on to our website latestly.com).