After receiving the information, the fraudsters would then make cloned ATM cards and use the PIN passed on by the waiters in order to withdraw money from the ATM, an officer said. 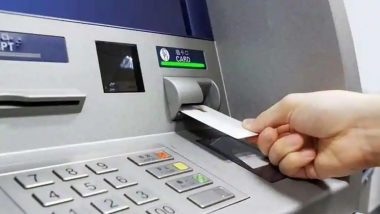 Mumbai, May 5: The Thane police recently arrested four men for allegedly making cloned ATM cards and withdrawing money by using them. The alleged incident came to light on April 30 after the Manikpur police arrested Saurabh Yadav, a resident of Virar (east).

According to a report in the Indian Express, Yadav was arrested after the police received a tip-off. After being arrested, Yadav told cops about his three accomplices from Bihar identified as Dhanraj Paswan, Pawankumar Paswan, and Rakesh Choudhari who were arrested immediately.

During the investigation, the four accused said that they used to keep in touch with waiters at restaurants and bars. As per the modus operandi, the waiters had to skim the credit or debit cards of customers on a skimming device when they gave their cards to make a payment. Pune Shocker: 70-Year-Old Man Molests, Rapes 3-Year-Old Girl in Kondhwa; Arrested.

Police officials said that after stealing the data via a skimming device, the waiters used to observe the customers as they entered their four-digit pin in order to complete the transaction. Following this, the waiters then passed the information to the alleged fraudsters.

After receiving the information, the fraudsters would then make cloned ATM cards and use the PIN passed on by the waiters in order to withdraw money from the ATM, an officer said.

The cops have seized three laptops, four ATM card cloners, eight ATM card skimming devices, five mobile phones, and 103 cloned ATM cards of different banks from their possession. All the four accused have been under the Indian Penal Code (IPC) and IT Act sections for cheating and forgery. The police are looking to ascertain how many people were cheated by the accused.

(The above story first appeared on LatestLY on May 05, 2022 04:50 PM IST. For more news and updates on politics, world, sports, entertainment and lifestyle, log on to our website latestly.com).