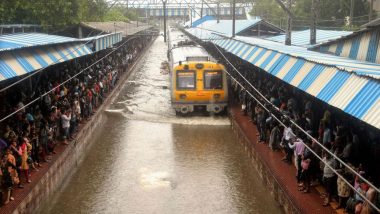 Central Railways services between Chhatrapati Shivaji Maharaj Terminus(CSMT) and Thane railway station have been suspended.  According to a Hindustan Times report, the harbour railway line between CSMT and Vashi has also been affected by the rainfall. Monsoon 2020 Could End in Normal to Above Normal Category, Says IMD.

Passengers Stranded at Sion Railway Station Due to Heavy Downpour:

#WATCH Maharashtra: Passengers were stranded at Sion railway station in Mumbai yesterday due to waterlogging following heavy downpour in the area. pic.twitter.com/cR3h3yCEab

(The above story first appeared on LatestLY on Sep 23, 2020 07:26 AM IST. For more news and updates on politics, world, sports, entertainment and lifestyle, log on to our website latestly.com).