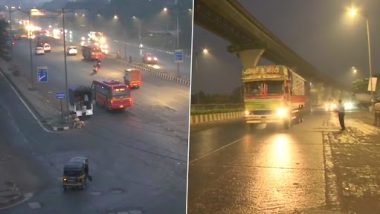 Mumbai, December 11: Parts of Mumbai received light drizzle on Friday bringing relief from the heat and sultry weather. According to reports, several areas including Sion, Kurla, Wadala, Kalyan, Ambernath, Badlapur experienced drizzle and a pleasant climate. The city is also likely to witness cloudy skies towards the later half of the day on Friday. On Thursday, Mumbai recorded the second highest minimum temperature in the last 10 years at 24 degrees Celsius. The highest minimum temperature recorded in the decade was on December 5, 2019 which was at 25.3 degrees Celsius. Monsoon 2020 Could End in Normal to Above Normal Category, Says IMD.

On Thursday, the minimum temperature recorded by the IMD’s Santacruz weather observatory was 5.2 degrees above normal. At the Colaba weather observatory, the minimum temperature recorded was 25 degrees Celsius, which is 3.7 degrees above normal.  According to reports, the India Meteorological Department (IMD) said the change in the weather conditions was due to a low-pressure weather system has formed over the southeast Arabian Sea and led to the formation of associated weather systems along the west coast.

The system over the Arabian Sea, and is likely to continue for the next three days. The IMD added that Mumbai is not likely to receive any unseasonal rain while several parts of Maharashtra including south Konkan and south-central Maharashtra may witness rainfall in the coming days

(The above story first appeared on LatestLY on Dec 11, 2020 08:34 AM IST. For more news and updates on politics, world, sports, entertainment and lifestyle, log on to our website latestly.com).