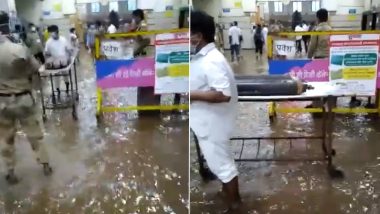 "The rainwater entered the ground floor late afternoon, forcing us to shift some of the patients and equipment," said a resident doctor " Authorities have managed to clear the water. According to the Brihanmumbai Municipal Corporation (BMC),  there is no water accumulation.  Mumbai Rains: Heavy Winds Wreak Portion of DY Patil Stadium, Sway Lights of Wankhede, Bring Down Cladding of Jaslok Hospital (Watch Pics and Videos).

Video of Rainwater Inside JJ Hospital:

Water had entered JJ Hospital in the evening due to incessant rainfall. It was later cleared and currently, there is no water accumulation: Brihanmumbai Municipal Corporation (BMC) #Maharashtra https://t.co/rC4DKrcvO7 pic.twitter.com/kIYBv6Bzj1

Rains pounded Palghar and Thane causing waterlogging in many towns like Mira Road, Bhiwandi, Kalyan, Ulhasnagar, Naigaon, Vasai, Virar and Dahanu, hitting people in a big way. The IMD has forecast heavy to extremely heavy spells of rain in Mumbai and the coastal Konkan area in the next 24 hours.

(The above story first appeared on LatestLY on Aug 06, 2020 12:10 AM IST. For more news and updates on politics, world, sports, entertainment and lifestyle, log on to our website latestly.com).