Munde's spokesperson also alleged that the NCP leader has shared evidence with the cops that show the woman had been demanding money by using international numbers through messages and WhatsApp. 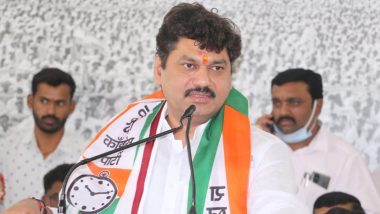 Mumbai, April 22: The Crime Branch unit of Mumbai Police on Thursday arrested a woman for allegedly threatening and demanding money from Maharashtra Social Justice Minister and NCP leader Dhananjay Munde. Munde told cops that the woman is the sister of his former live-in partner.

In his complaint, the NCP leader alleged that the woman was threatened to post a message on social media saying that he forced her to withdraw a rape complaint, reports Indian Express.

In order to not share the post, the woman demanded Rs 5 crore in cash and a shop worth Rs 5 crore, Munde told cops. Odisha Shocker: Man Forced To Rub Nose in His Own Spit After Refusing To Pay Donation for Temple Deity.

The Mumbai Police registered a case on Wednesday, post which his office issued a statement stating that the woman had imposed rape allegations against him in January 2021. However, a few days later the woman had withdrawn the complaint.

Munde's spokesperson also alleged that the NCP leader has shared evidence with the cops that show the woman had been demanding money by using international numbers through messages and WhatsApp.

"Last year, when a paper was put up on social media, your ministerial post had come in danger. Now if my demand is not met, I will defame you again. If you want to save the ministerial post, what's the big deal in giving 10 crores?," one of the messages which Munde submitted to the police read.

Munde also told the police that the woman had been harassing him since January 2021. While Munde did give her money and an expensive phone but when the demands grew, he approached the Mumbai crime branch an officer said.

A case of extortion has been registered at the Malabar Hill police station and the woman was arrested from Indore. She was produced before a court and has been remanded in police custody till Saturday.

(The above story first appeared on LatestLY on Apr 22, 2022 09:02 AM IST. For more news and updates on politics, world, sports, entertainment and lifestyle, log on to our website latestly.com).