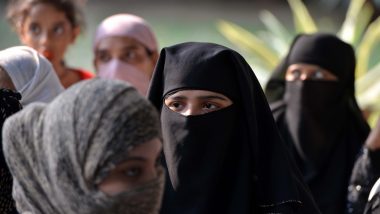 New Delhi, July 31: Muslim women thanked the Narendra Modi government for abolition of Triple Talaq. It was on July 31 in 2019 that the Bill was passed in Parliament that led to the abolishing of the Triple Talaq.  President Ram Nath Kovind gave his nod to the Bill on August 1. Due to this reason "Muslim Women's Rights Day" or "Muslim Mahila Adhikar Divas."  is celebrated on August 1.

"Today is a historic day, as on this day the Triple Talaq Bill was passed. I congratulate Prime Minister Modi Ji, Union Minister for Minorities Affair Mukhtar Abbas Naqvi. Earlier it was very easy to give Talaq, but now our community is happy," Siraj Unnisa Begum, senior BJP leader, said. Triple Talaq in Chhattisgarh: Woman Harassed, Given Instant Divorce by Husband for Seeking Maintenance From Him.

On the occasion of “Muslim Women's Right Day”, Union ministers Mukhtar Abbas Naqvi, Smriti Irani, and Ravi Shankar Prasad spoke to Muslim women across the country through video conferencing. Naqvi said that commitment of the Government is “Politic Empowerment and not Political Exploitation”.

He added, “1st August is a day which made Muslim women free from social evil of Triple Talaq; 1st August has been recorded in the country’s history as “Muslim Women Rights Day”. 1st August will remain as a golden moment of Indian democracy and Parliamentary history.” Naqvi said that after the passage of the law, there has been 82 per cent decrease in Triple Talaq cases in the country.

Speaking on the occasion, Union Law and Justice Minister Ravi Shankar Prasad asked why did it take India 70 years to bring a law against triple talaq and pointed out that it is a "law for women's rights and self-respect". He said that he will work towards suggestions to make Muslim women digitally literate.

Smriti Irani, in her address, said the passage of the Triple Talaq Bill is a victory for millions of Muslim women and called it a "true testimony" to "Sabka Saath, Sabka Vikas, Sabka Vishwas". About 50,000 Muslim women from various places across the country joined the virtual conference.

(The above story first appeared on LatestLY on Jul 31, 2020 11:35 PM IST. For more news and updates on politics, world, sports, entertainment and lifestyle, log on to our website latestly.com).