Narendra Modi 4th Among World's Most Admired Men of 2020, Sudha Murthy in List of 20 Most Admired Women: YouGov Rankings 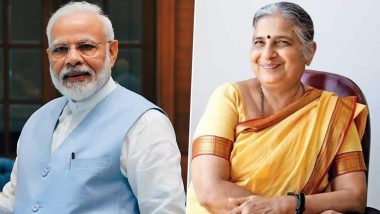 New Delhi, September 26: The YouGov rankings of world's most admired men and women in 2020 were released on Friday and included a number of prominent Indians. The list, including 20 men and 20 women, featured Indian personalities cutting across several realms of societies. The most prominently featured name in the list was that of Prime Minister Narendra Modi. Sudha Murthy's Pic With Vegetables Go Viral, Here is What The Image is About.

Modi, who has been leading the Indian government since 2014, was placed on 4th spot in the world's most admired men 2020 rankings. Despite being in power for the last six years, he continues to remain one of the most popular leaders in India.

A notable personality to feature in the list of 20 most admired women across the globe includes Sudha Murthy, an author known for her social work. She is also the wife of Infosys Foundation chairman Narayana Murthy.

YouGov Rankings: Check List of 20 Most Admired Women and Men

Among those Indians named in the list of most admired men, apart from PM Modi, are actor Amitabh Bachchan (14th), cricketer Virat Kohli (16th) and Bollywood star Shah Rukh Khan (17th). The ranking is topped by former US President Barack Obama.

The list of most admired women is topped by Obama's wife and former US First Lady Michelle Obama. Actress and human rights activist Angelina Jolie is on the second spot, whereas, Pakistan-origin girls' education activist Malala Yousafzai is 11th. The two Indians to feature in the list are Priyanka Chopra (15th) and Sudha Murthy (17th).

(The above story first appeared on LatestLY on Sep 26, 2020 07:59 PM IST. For more news and updates on politics, world, sports, entertainment and lifestyle, log on to our website latestly.com).