The purported incident occurred Saturday night when, according to eye witnesses, two persons landed on a parachute on the palm beach road near the Ghansoli creek, a police official said. 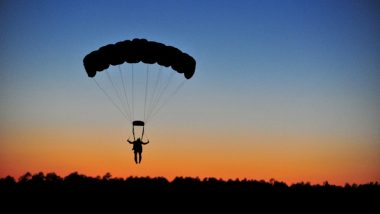 Mumbai: Two unidentified persons reportedly landed on a parachute in neighbouring Navi Mumbai’s Ghansoli area, prompting a probe by various agencies including police and the Maharashtra ATS, an official said Tuesday. The purported incident occurred Saturday night when, according to eye witnesses, two persons landed on a parachute on the palm beach road near the Ghansoli creek, a police official said.

He said one of them was reported to be a woman who could be a foreigner. Deputy Commissioner of Police (Zone-I) Sudhakar Pathare said the police are verifying the claims of residents. “We are investigating the incident. Inquiry is on,” said Pathare. The DCP said various teams of police are analysing footages from CCTV cameras in the area. Couple Electrocuted in a ‘Batman’ Parachute After They Hit High-Voltage Cables at a Russian Beach (Watch Video).

Meanwhile, another police official said the CCTV footage shows two persons at the spot being mentioned by the local residents, but the images are unclear. “Witnesses told police that the two persons, including a woman, landed on the road in night, sat in a car waiting for them, and left,” he said. The Anti-Terror Cell of local police, Maharashtra ATS and other agencies are investigating the incident, he said.

Navi Mumbai is a planned city off the west coast in the Konkan region of Maharashtra. In September 2016, panic gripped Uran area in Navi Mumbai when some people claimed that they had spotted a group of suspicious armed men in Pathan suits.

A “highest state of alert” was then issued along the Mumbai, Navi Mumbai, Thane and Raigad coasts where several sensitive establishments and assets are located. However, the operation to trace the ‘suspicious’ men was later called off, after the agencies concluded that the report was a hoax.