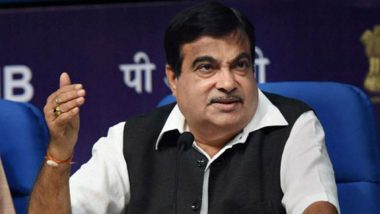 Nagpur, November 8: Union Minister Nitin Gadkari on Sunday said he was working on an idea to set up a refinery for production of aviation fuel from bamboo grown in Maharashtra's Gadchiroli district. Gadkari was speaking at the inauguration of an "Atmanirbhar Bharat' assistance office here.

"I am planning to set up a bio-refinery for production of aviation fuel. The bamboo for this will be sourced from Gadchiroli district. I have begun work on this and in two to three years, I will show you flights running on this bio fuel," he said at the inauguration event. SpiceJet Operates India’s First Bio-fuel Flight, Lands Aircraft Successfully at Delhi’s IGI Airport.

Gadkari asked public representatives to initiate small programmes in Nagpur district to create self-employment chances for at least 10,000 people over the next two years.