Odisha: Shocking Video of a Priest Blessing His Devotees on Vijaya Dashami by Putting His Foot on Their Heads Goes Viral!

A shocking video of a temple priest giving his blessings to people by putting his foot on their heads on the auspicious occasion of Vijaya Dashami, in Banpur area of Khordha, Odisha has gone viral. He has received immense flak for his actions. 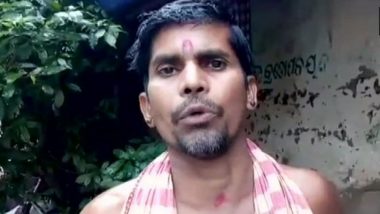 Odisha, October 11: In a shocking video that has come to the front, a temple priest was seen giving his blessings to people by putting his foot on their heads on the auspicious occasion of Vijaya Dashami, in Banpur area of Khordha, Odisha. His actions have received immense flak on social media and people have termed it not only offending but also dehumanising.

In the video, various drivers of vehicles can be seen sitting in a queue, while the priest who seems to be reciting prayers, arrives to bless the devotees. He can then be seen touching the backs of the devotees with his foot. Odisha: Elderly Couple Thrashes Daughter-In-Law in Public, Video Goes Viral.

#WATCH A temple priest gives blessings to people by putting his foot on their heads on #VijayaDashami (8th October), in Banpur area of Khordha, #Odisha pic.twitter.com/1LxpnnfPqP

Speaking to ANI, the priest, R Samantaray clarified his actions and said, "Other rituals were also followed, 'jajman' have faith in us. People who circulated it don't know about puja,they want to show it in some other light. Some people might have found it offending but the tradition has been followed for years now."

(The above story first appeared on LatestLY on Oct 11, 2019 07:49 AM IST. For more news and updates on politics, world, sports, entertainment and lifestyle, log on to our website latestly.com).