Security and intelligence agencies have unearthed a major terror-funding racket pumping funds to the militants in Jammu and Kashmir via Nepal-Bihar-UP route, according to knowledgeable sources. 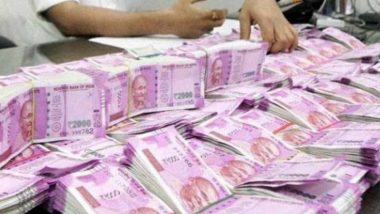 New Delhi, March 4: Security and intelligence agencies have unearthed a major terror-funding racket pumping funds to the militants in Jammu and Kashmir via Nepal-Bihar-UP route, according to knowledgeable sources.

"We have observed the terror-funding operatives using the services of certain jewellers, shopping mall owners and other traders in Nepal and sending money with the help of youths operating in villages of Bihar and Uttar Pradesh, bordering Nepal", said an official. Pakistan Remains in FATF Grey List Until June; Terror Funding Watchdog Cites 'Serious Deficiencies'.

According to these sources, substantial amounts of money have already been pumped for some militant organisations in Jammu and Kashmir. Officials insist that a number of over-ground workers and their sympathisers working at the instance of Pakistan's Inter-Services Intelligence (ISI), Army, Lashkar-e-Tayyiba (LeT), Jaish-e-Mohammed (JeM) and Hizbul Mujahideen are involved in the racket and all of them would be rounded up.

The network, according to these officials, came to light when Sashastra Seema Bal (SSB), guarding the Indian international borders with Nepal in Bihar and Uttar Pradesh spotted mysterious activities of the local youths and detained them. Their revelations during sustained questioning made it clear that they were part of a hawala ring engaged in passage of funds to the militants in Kashmir. A number of them had already made multiple trips to Jammu and Kashmir.

The ISI operatives, the Pakistani army and some militant commanders are now known to have deposited cash in different bank accounts of certain Nepal-based traders including jewellers and shopping mall owners. The Nepal businessmen through their couriers have been engaging youths in the villages of Bihar and Uttar Pradesh, bordering Nepal, and passing to them cash between Rs 2-5 lakh in the Indian currency. These youths of normal criminal background would pass on the money to the militants in J&K against a fixed commission.

Efforts are said to be underway to gain access of the Indian security and investigating agencies to the Nepal-based businessperson and other functionaries of the terror-funding network with the involvement of the Union Ministry of External Affairs. Most of the identified traders, according to sources, were not linked to militancy but have been indulging in hawala trade for the sake of making easy money.

The dramatic arrest of Hidayatullah Malik of Shopian, the founder-chief of the Jaish-e-Mohammad front and the Lashkar-e-Mustafa (LeM) has led to the arrest of at least five of his alleged associates. One among them is Javaid Alam Ansari who was arrested from his house at Deobahuara village of Chapra and was brought to Jammu on 20 February on transit remand for sustained interrogation.

Working on specific information about his presence and activities in Jammu, Delhi and other places in India, the special operations group of Jammu and Kashmir Police claims to have arrested Hidayatullah from a shopping mall in Kunjwani outskirts of the winter capital of Jammu on 6 February. His revelations have, among others, led to the arrest of two important terror operatives from Bihar and Chandigarh.

Authorities have learned that at least seven country-made pistols have been smuggled in through this network from Bihar and UP for carrying out terrorist activities in Jammu, Delhi and other places. Two such pistols with some ammunition have been seized by the J&K Police before this case's transfer to the National Investigation Agency (NIA) for a broader investigation on Tuesday, 2 March 2021.

Working on Hidayatullah's disclosures, the Jammu Police got Javid Alam Ansari arrested from Chapra in Bihar. He has admitted to having supplied seven country-made pistols to the JeM operatives working under the cover of LeM. The supplier of the arms and ammunition, according to sources however was an ordinary criminal and not a militant. He is among the five detainees being handed over to the NIA for further investigation.

The J&K Police were still investigating as to where the LeM militants had spent or concealed the cash of Rs 60 lakh which they had looted from a cash delivery van of the J&K Bank in the Shopian township in November 2020. Nothing of that money has been recovered.

(The above story first appeared on LatestLY on Mar 04, 2021 11:29 PM IST. For more news and updates on politics, world, sports, entertainment and lifestyle, log on to our website latestly.com).