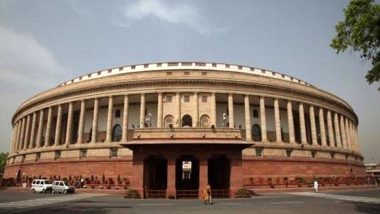 New Delhi, January 28: Ahead of the Budget Session, the Parliament canteen issued a new rate list. The new rate list comes after the subsidy to Parliament canteen ended recently. According to the new rate, a chapatti will now cost Rs 3 (the cheapest item) and the menu will stretch on to include a non-veg buffet worth Rs 700. Price of a veg buffet has been set as Rs 500.

Earlier in the month, Lok Sabha Speaker Om Birla announced that subsidy on food served at Parliament canteen would end. The Parliament canteen, now run by ITDC, will offer as many as 58 food items—both vegetarian and non-vegetarian—from January 27, an internal circular said. Parliament Canteen Food Prices to be Hiked as Government Plans to Slash Subsidy, Non-Veg Items to Remain on New Menu.

Roti is now 3 rupees, the most expensive non-veg buffet is 700 rupees.#parliamentcanteen pic.twitter.com/6ofnzOygrZ

Some new items have been added like new items include fish and chips, medu vada, mutton cutlet, omelette, masala poori and uttapam. During a normal session, an average 4,500 people eat at the Parliament every day.

(The above story first appeared on LatestLY on Jan 28, 2021 07:56 AM IST. For more news and updates on politics, world, sports, entertainment and lifestyle, log on to our website latestly.com).