Parliament Canteen Food Prices to be Hiked as Government Plans to Slash Subsidy, Non-Veg Items to Remain on New Menu

Prices of food at Parliament's canteen will be hiked soon as the government is planning to do away with a subsidy that’s come in for a lot of criticism. 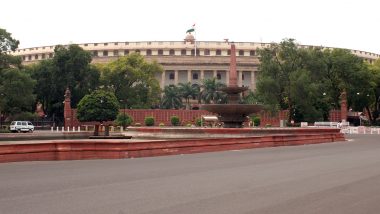 New Delhi, January 21: Prices of food at Parliament's canteen will be hiked soon as the government is planning to do away with a subsidy that’s come in for a lot of criticism. The government might also remove some unpopular items from the new menu. The current menu has 48 food items. However, non-veg dishes will remain on the new menu. Lok Sabha Speaker Om Birla is personally monitoring the food price issue at Parliament's canteen.

"We hope to finalise the new rates during the recess between the two parts of the budget session and roll out the revised food rates from March," Om Birla was quoted by Hindustan Times as saying. The Lok Sabha secretariat had planned to roll out revised rates from the beginning of the upcoming budget session. However, Birla could not have enough time to look into the issue due to other engagements. Parliament Canteen to Now Sell at Market Rates, MPs 'Unanimously Decide' to Forego Food Subsidy.

In December last year, Birla held a meeting to discuss the subsidy in Parliament canteen. He had sought to know how much subsidy is given to Parliament canteen and how many lawmakers eat there regularly. He recently said that some dishes might be removed from the existing menu as there was limited demand for such items. The most sought-after food in the Parliament complex is vegetarian thali (Rs 40) and chapattis (Rs 2 each).

In 2015, the then Lok Sabha Speaker Sumitra Mahajan had approved a proposal to revoke subsidy on food and run Parliament canteen on a no-profit-no-loss basis. The decision came after years of public criticism that MPs who earn a lot used to get a plate of chicken curry for Rs 29 or dal for just Rs 2. Those prices have since been increased. Currently, chicken curry is sold for Rs 50.

The waiver of subsidies on Parliament canteen's food will result in saving around Rs 17 crore annually. Out of the total subsidy of Rs 17 crore, Rs 14 crore is at present availed by Parliament staff and others who visit the premises while Rs 3 crore is by MPs.

(The above story first appeared on LatestLY on Jan 21, 2020 09:39 AM IST. For more news and updates on politics, world, sports, entertainment and lifestyle, log on to our website latestly.com).