Residents of Thulasendrapuram village in Tamil Nadu are enjoying a vegan celebration ahead of Kamala Harris' inauguration as the next US Vice President on Wednesday. 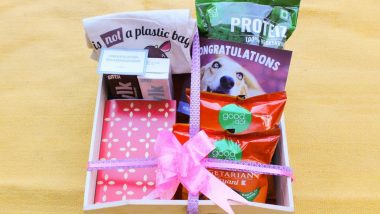 Chennai, Jan 18: Residents of Thulasendrapuram village in Tamil Nadu are enjoying a vegan celebration ahead of Kamala Harris' inauguration as the next US Vice President on Wednesday.

Harris' maternal family hails from this village which has witnessed non-strop celebrations ever since she made US history as the first woman, the first person of Indian descent and also the first woman of colour to be elected Vice President. Indian Names Bloom in White House Power Circle After #MyNameIs Blowback to Republicans' mangling of Kamala Harris.

People for the Ethical Treatment of Animals (PETA) India has sent baskets of vegan biryani and Proteiz chunks from GoodDot, flavoured oat milk from Good Mylk, vegan sweets, and other tasty goodies to every family in Thulasendrapuram, where Harris' grandfather was born.

The village panchayat and its volunteers are delivering the baskets on PETA India's behalf.

"PETA India is delighted to help Thulasendrapuram celebrate the milestone of Vice President-elect Harris's inauguration with vegan goodies, especially since she has sponsored and supported so much legislation in the US against cruelty to animals," says PETA India spokesperson Radhika Suryavanshi.

"Vegan food save animals' lives, help preserve the planet, and safeguard human health, so everyone wins."

PETA India's support for vegan eating is based on the premise that it spares animals from suffering and a terrifying, bloody death in today's meat, egg, and dairy industries.

Harris has spoken in favour of encouraging healthy eating habits among Americans and being aware of the effects of eating habits on the environment.

(The above story first appeared on LatestLY on Jan 18, 2021 02:10 PM IST. For more news and updates on politics, world, sports, entertainment and lifestyle, log on to our website latestly.com).