Plastic Ban in India From October 2: What is Single-Use Plastic? Which Items Will be Banned And What Won't be? All Your Questions Answered

The Narendra Modi government is going to implement the nationwide ban on plastic from October 2 onwards, from the day of Gandhi Jayanti. Here's an explainer on what is single-use plastic, which items will be banned and what won't be. 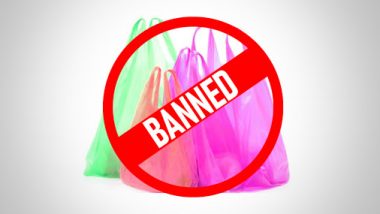 New Delhi, October 1: The Narendra Modi government is going to implement the nationwide ban on plastic from October 2 onwards, from the day of Gandhi Jayanti. Among the products that come under the banner of the plastic ban include single-use plastic and its products. Here's an explainer on what is single-use plastic, which items will be banned and what won't be. Plastic Ban in India: Mumbai Airport To Become 100% Free of Single-Use Plastic by October 2.

What is Single-Use Plastic?

The definition of single-use plastic varies from people to people. However, the most accepted definition of the "Single-Use Plastic" -- also called disposable plastics -- are that those plastics used for packaging and include items intended to be used only once before they are thrown away or recycled. These include, among other items, grocery bags, food packaging, bottles, straws, containers, cups and cutlery.

6) Plastic packets for foods and beverages.

What Not Banned Yet?

While the list for all other single-use plastic products is out, the details on other non-disposable plastic products like electronic gadgets -- computers, pen drives, air conditioners, etc., -- is yet to be decided. The Union government is yet to decide a ban on the e-waste (electronic waste) and mulling the recycling of it to refrain the excess production of hard plastics.

Not only in the market places, but the single-use plastic ban also been imposed by the Chhatrapati Shivaji Maharaj Terminus authority and Brihanmumbai Municipal Corporation (BMC). Also, Western Railways has installed a polyethylene terephthalate (PET) bottle crushing machine in Mumbai Rajdhani Express, with an aim to get rid of plastics under the Indian Railways' Swachh Bharat and Go Green missions. Plastic Ban in India: Nationwide Single-Use Plastic Ban to Kick Off on October 2; Here What’s Banned, What’s Not.

Though the estimate of revenue loss to the exchequer remains unaccounted, unofficial estimates show that the ban on single-use plastic bags, cups, plates, small bottles, straws and packets for foods and beverages would reduce 14 million tons of annual consumption in India by 5-10 percent.

With the impact of the ban on the single-use plastic is yet to be estimated, Namkeen Mithai Association and MP Thermoforming Products Association have raised concerns over the rising stocks of single-use plastic and demanded tax benefits for clearing off GST paid stocks. Even e-commerce giants Amazon India and Flipkart have set targets to stop the complete use of single-use plastics in packaging. Plastic Ban in Mumbai: BMC to Cancel Hawkers’ License If They’re Found Using or Selling Banned Carry Bags.

Impact on the Environment:

The single-use plastic ban initiative has been taken by the Union government citing environmental concerns and a phase-wise ban on plastic from the nation by 2022. According to the government data, around 50 percent of single-use plastic products end up in the ocean harming the marine life and entering the human food chain, while 25, 940 tonnes of plastic waste is generated every day in the country. Also, it had mentioned that plastic bottles take between 450-1000 years to decompose. It stated that each year, 40 percent of plastic waste remains uncollected, and 60 million tonnes of solid waste is generated.

(The above story first appeared on LatestLY on Oct 01, 2019 01:12 PM IST. For more news and updates on politics, world, sports, entertainment and lifestyle, log on to our website latestly.com).