Consumer electronics, electric vehicles, advanced electricity grids, solar rooftop among others, which are major battery-consuming sectors, are expected to achieve robust growth in the coming years. It is expected that the dominant battery technologies will control some of the world's largest growth sectors. 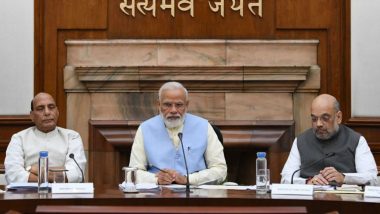 New Delhi, May 12: The Union Cabinet has approved the Production Linked Incentive (PLI) scheme, 'National Programme on Advanced Chemistry Cell (ACC) Battery Storage' for achieving a manufacturing capacity of 50 Giga Watt Hour (GWh) of ACC and 5 GWh of 'niche' ACC, at an outlay of Rs 18,100 crore. ACCs are the new generation of advanced storage technologies that can store electric energy, either as electrochemical or as chemical energy, and convert it back to electric energy, as and when required. Consumer electronics, electric vehicles, advanced electricity grids, solar rooftop among others, which are major battery-consuming sectors, are expected to achieve robust growth in the coming years. It is expected that the dominant battery technologies will control some of the world's largest growth sectors. Dehradun Mussoorie Ropeway Project: Cabinet Approves Transfer of ITBP Land to Uttrakhand for Ropeway System.

While several companies have already started investing in battery packs, though the capacities of these facilities are too small when compared to global averages, but there still is a negligible investment in manufacturing, along with value addition, of ACCs in India, said an official statement. All the demand for the ACCs is currently being met through imports in India. The National Programme on Advanced Chemistry Cell (ACC) Battery Storage will reduce import dependence. ACC battery storage manufacturers will be selected through a transparent competitive bidding process. The manufacturing facility would have to be commissioned within a period of two years. The incentive will be disbursed thereafter over a period of five years. PM Narendra Modi-Led Union Cabinet Approves Strategic Disinvestment and Transfer of Management Control in IDBI Bank.

The incentive amount will increase with increased specific energy density and cycles and increased local value addition. Each selected ACC battery Storage manufacturer would have to commit to set-up an ACC manufacturing facility of a minimum of five (5) GWh capacity and ensure a minimum of 60 per cent domestic value addition at the project level within five years. Furthermore, the beneficiary firms have to achieve a domestic value addition of at least 25 per cent and incur a mandatory investment of Rs 225 crore/GWh within two years (at the Mother Unit Level) and raise it to 60 per cent domestic value addition within five years, either at Mother Unit, in-case of an Integrated Unit, or at the Project Level, in-case of "Hub & Spoke" structure. The scheme is expected to bring an indirect investment of around Rs 45,000 crore in ACC battery storage manufacturing projects.

(The above story first appeared on LatestLY on May 12, 2021 06:56 PM IST. For more news and updates on politics, world, sports, entertainment and lifestyle, log on to our website latestly.com).