Prime Minister Narendra Modi on Monday urged the farmers of Himachal Pradesh to go fully organic and make the soil free from chemicals in next 25 years. 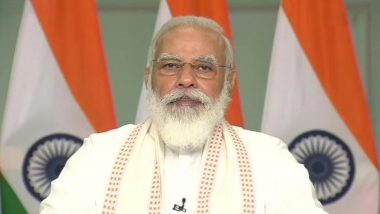 New Delhi, Sep 6: Prime Minister Narendra Modi on Monday urged the farmers of Himachal Pradesh to go fully organic and make the soil free from chemicals in next 25 years.

"I would like to make a request to the farmers and gardeners of Himachal during the Amrit Mahotsav of Independence. Can we make efforts to make Himachal agriculture organic again in the next 25 years?" Modi said during a virtual interaction with healthcare workers and Covid vaccination beneficiaries in the hill state.

"Gradually, we have to free our soil from chemicals. We have to move towards such a future where the soil and the health of our sons and daughters remain robust. I have faith in the potential of Himachal and the youth power of Himachal. PM Narendra Modi Releases Over Rs 20,667 Crore to 9.50 Crore Beneficiary Farmers Under PM-KISAN Scheme.

Sikkim was the first state in India to go fully organic in 2016. Approximately 75,000-hectare area was transformed under the National Programme for Organic Production meant to promote organic farming in the northeastern state.

The programme was launched during 2001 to lay the foundation for systematic development of organic agriculture sector in the country. NPOP, which provides for an institutional framework for accreditation and certification of various facets of organic agriculture processes has earned international recognition and enjoys recognition agreements with European Union, Switzerland, and USDA - NOP.

NPOP is being managed and operated by the APEDA under the Union Ministry of Commerce and Industry. Started with just 42,000 ha during 2003-04, it has grown almost 42 fold, touching a figure of 1.78 million ha during 2017-18, government data showed. Almost all types of agricultural, horticultural and non-food crops are being grown under organic certification process. Livestock, aquaculture, animal feed processing and handling, mushroom, sea weeds, aquatic plants and green house crop production have also been brought under the ambit of organic certification.

(The above story first appeared on LatestLY on Sep 06, 2021 11:09 PM IST. For more news and updates on politics, world, sports, entertainment and lifestyle, log on to our website latestly.com).