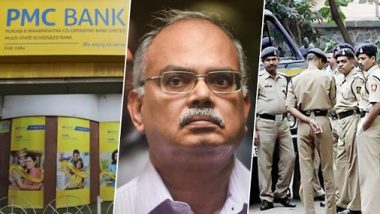 According to the initial details, the EOW of Mumbai Police conducted raids at six locations in Mumbai and adjoining areas on Friday before arresting Joy Thomas. The EOW took action against Thomas and others in the alleged PMC Bank scam under the Prevention of Money Laundering Act. The Enforcement Directorate too filed the case and conducted joint raids were conducted, aiming at gathering additional evidence. PMC Bank Crisis: Mumbai Police Economic Offence Wing Arrests HDIL Directors Sarang Wadhawan and Rakesh Wadhawan, Freezes Rs 3,600 Crore.

Earlier, Reserve Bank of India-appointed administrator filed a complaint against the accused on charges of forgery, cheating and criminal conspiracy. Investigation states that PMC Bank lost around Rs 4,335.46 Crore since 2008, due to the discrepancies by the bank officials.

Meanwhile, the RBI had raised the withdrawal limit for depositors of PMC Bank to Rs 25,000 for six months, from the earlier set limit of 10,000. The decision was taken after chaos and panic circulated among the depositors on the future of their savings in the bank. PMC Bank Crisis: RBI Increases Withdrawal Limit to Rs 25,000.

Apart from this, The PMC Bank has been barred from granting or renewing loans and advances, making any investments, incurring any liability, including borrowing of funds or accepting fresh deposits, among others, without the prior written approval from RBI. Founded in 1984, the PMC Bank has branches in Maharashtra, Delhi, Karnataka, Goa, Gujarat, Andhra Pradesh and Madhya Pradesh.

(The above story first appeared on LatestLY on Oct 04, 2019 07:11 PM IST. For more news and updates on politics, world, sports, entertainment and lifestyle, log on to our website latestly.com).