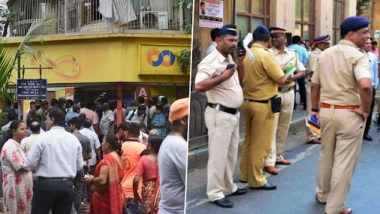 Mumbai, October 16: The Esplanade Court in Mumbai on Wednesday sent Punjab and Maharashtra Cooperative (PMC) Bank fraud accused HDIL Chairman and Managing Director Rakesh Kumar Wadhawan and Sarang Wadhawan, and former chairman Waryam Singh to judicial custody till October 23, 2019. All the three are accused have been arrested by the Economic Offence Wing of the Mumbai Police and were sent to judicial custody till October 16.

Apart from the major development in the PMC Bank case, the Supreme court has agreed to hear the plea of Bijon Mishra on October 18. In the plea, Mishra has sought a direction for protection of over 15 lakh and 100 percent insurance cover PMC depositors. It is to be known that three of the cooperative bank’s account-holders died over the last 24 hours in Mumbai due to the stress they faced by PMC crisis. PMC Bank Crisis: Praful Patel Used Aircraft Owned by HDIL's Associate Firm for Personal Use, Claims ED.

Among the three who died due to severe stress include former Jet Airways senior technician Sanjay Gulati, Fattomal Punjabi and Dr Yogita Bijlani. Though, Reserve Bank of India relaxed the withdrawal limit for depositors from Rs 25,000 to Rs 40,000; other restrictions like granting or renewing loans and advances, making any investments, incurring any liability, including borrowal of funds or accepting fresh deposits, among others, without the prior written approval are still in place.

Also, reports are arriving that NCP leader and former Civil Aviation Minister Praful Patel allegedly used an aircraft -- owned by an associate firm of the Housing Development India Ltd (HDIL). The recent claim has been made by Enforcement Directorate, who stated that Patel used HDIL's Falcon 2000 VT HDL multiple times for personal use.

(The above story first appeared on LatestLY on Oct 16, 2019 12:23 PM IST. For more news and updates on politics, world, sports, entertainment and lifestyle, log on to our website latestly.com).