Congress general secretary Priyanka Gandhi Vadra on Thursday slammed Uttar Pradesh Chief Minister Yogi Adityanath saying people have the right to their views and abusing power to intimidate them is a "heinous crime". 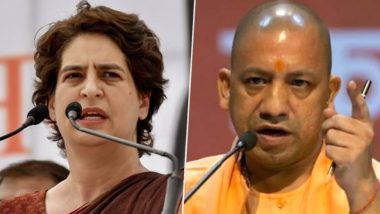 She also reminded the Chief Minister that the property on which he is sitting can be confiscated by the people. In a series of tweets in Hindi, Priyanka Gandhi, who is in-charge of Uttar Pradesh Congress said, "It is a constitutional right to raise your voice, to demonstrate and to agitate for your demands in this country. Abusing power to intimidate those who raise their voice for legitimate demands is a heinous crime. The 'property' on which Yogi (Adityanath) ji is sitting, does not belong to him but it belongs to the people of the country." Priyanka Gandhi Slams Yogi Adityanath Over Oxygen Crisis in Agra Hospital, Asks ‘Will UP Govt Bring Truth of Hospital Mockdrill?’

"And remember even that 'property' can one day be confiscated by the people," she said in another tweet. She made the remarks while responding to a tweet of the Chief Minister in which he appealed to the youth of the state that they should not be misled by anyone.

The Chief Minister said, "No one can do wrong today. Whoever wants to get his property confiscated, he should do wrong." Priyanka Gandhi has been critical of the state government over several issues.

(The above story first appeared on LatestLY on Jul 22, 2021 05:40 PM IST. For more news and updates on politics, world, sports, entertainment and lifestyle, log on to our website latestly.com).