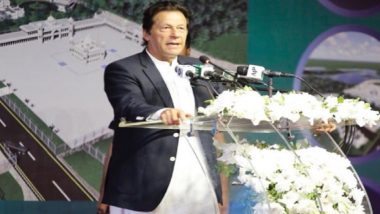 The pro-Khalistan activist while presenting the honour also praised Khan and General Bajwa for opening the Kartarpur Corridor. Later in the day, Hansara thanked the Consulate General of Pakistan for attending the event through his Facebook post. He wrote, “I was honoured to speak at the event and present [gold-plated certificate] to a most progressive thinking politician PM Imran Khan. As the lead organiser, I want to thank the entire organising team, the Sikh community, the Pakistani community and the Consulate General of Pakistan Imran Ahmad Siddiqui to bless us with their presence.” Kartarpur Corridor: Vice-President Venkaiah Naidu Lay Foundation Stone of Religious Corridor Between India And Pakistan.

Another Khalistani organisation, Sikhs for Justice (SFJ) had asked for support from Pakistan to organise Referendum 2020 conference at Kartarpur. The event is proposed to be held in November 2019. Meanwhile, earlier this month, Punjab Chief Minister Captain Amarinder Singh lambasted Sikhs for Justice (SFJ) for planning to separate Punjab from India with the help of Pakistan’s Inter-Services Intelligence (ISI). The chief minister claimed that he was all in favour of the Kartarpur Corridor to fulfil the long-pending aspirations of the Sikh community in India, but it was a "misuse" of the initiative that he was opposed to.

(The above story first appeared on LatestLY on Dec 25, 2018 05:43 PM IST. For more news and updates on politics, world, sports, entertainment and lifestyle, log on to our website latestly.com).