Chandrikapersad Santokhi, Indian-origin President of the Republic of Suriname, will be the chief guest at India's Republic Day 2021 event, according to a report. 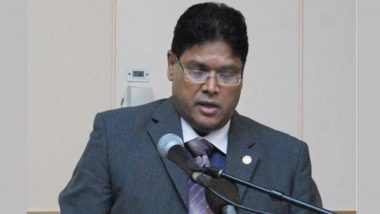 Santokhi will be attending the Republic Day 2021 event at Rajpath, News18 reported quoting sources. Initially, India had invited British Prime Minister Boris Johnson as the chief guest. However, Johnson cancelled his visit due to worsening coronavirus situation in the United Kingdom. Santokhi took reins of Suriname as President in July last year when his party, the Progressive Reform Party, won 20 of the 51 seats in the elections. Republic Day Parade 2021 To Be Shorter, Government To Reduce Number of Visitors in View of COVID-19.

Santokhi, a former Justice Minister, succeded Desi Bouterse, a former military strongman, whose National Party of Suriname (NPS) lost the election in May as he sent the country to an economic precipice. He had also served as the chief police commissioner of Suriname.

Suriname is a former Dutch colony where people of Indian descent make up the largest ethnic group comprising 27.4 per cent of the population of 587,000. The PRP, known in the Dutch language as Vooruitstrevende Hervormingspartij or VHP by its initials, largely represents the Indian community and had originally been called the United Hindustani Party.

(The above story first appeared on LatestLY on Jan 10, 2021 06:25 PM IST. For more news and updates on politics, world, sports, entertainment and lifestyle, log on to our website latestly.com).