Bihar Chief Minister Nitish Kumar was shocked for a moment when a retired teacher of Gopalganj district asked him to merge his village with Uttar Pradesh. 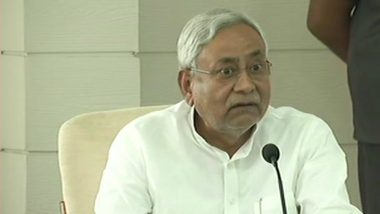 Patna, Sep 20: Bihar Chief Minister Nitish Kumar was shocked for a moment when a retired teacher of Gopalganj district asked him to merge his village with Uttar Pradesh.

Yogendra Mishra, a native of Bihiya village in Gopalganj district, retired around 20 years ago. He claimed he is doing social service in the village using his pension fund.

Speaking to the chief minister during the Janata Darbar on Monday afternoon, Mishra pointed out that his village is located on the border of Kushinagar district of Uttar Pradesh. "The Kushinagar city is just 1 km away from my village, sir (Nitish Kumar). So, please merge my village in Uttar Pradesh," Mishra said. Bihar Man Refuses to Return Amount Worth Rs 5.5 Lakh Credited To His Account By Bank Error, Claims PM Narendra Modi Has Sent The Money.

He pointed out that villagers are facing the problem of going to Gopalganj city for administrative work. "Whoever became ill in the village, used to go to Kushinagar for treatment. Hence, it will be better if the Bihar government takes initiative in this matter and starts the process of merging his village with Uttar Pradesh."

Nitish Kumar, after hearing the demand of the elderly teacher, smiled and sent him to an official.

(The above story first appeared on LatestLY on Sep 20, 2021 04:13 PM IST. For more news and updates on politics, world, sports, entertainment and lifestyle, log on to our website latestly.com).