According to the visuals in a tweet, the two men are seen jumping from a speeding train when the on-duty RPF personnel comes to their rescue. Reports inform that the passenger along with his son jumped from moving train after the duo realised that they had boarded a wrong train. 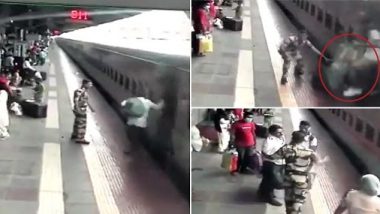 Mumbai, July 28: A major mishap was averted at Kalyan railway station in Maharashtra on Tuesday after two passengers jumped from a moving train and were saved by Railway Protection Force (RPF) personnel. According to the visuals in a tweet, the two men are seen jumping from a speeding train after which the on-duty RPF personnel comes to their rescue. Reports inform that a man along with his son jumped from the train after they realised that they had boarded a wrong train. While the young boy managed to fall away from the train, his father was dragged away from the speeding train by the RPF cop.

According to a report by TOI, RPF personnel K Sahu's alertness saved the lives of the two passengers. The two men- a 52-year-old passenger Dilip Mandge along with his son had booked a ticket in Kamayani Express but unknowingly boarded a wrong train- Pawan Express. As he realized his mistake, he panicked and alighted from a running train at Kalyan station. RPF Constable Shows Human Face of the Force, Runs Along Moving Train to Give Milk for Infant (Watch Video).

An on-duty MSF/RPF personnel rescued a passanger from falling between moving train and the platform today at Kalyan station. The passenger along with his son jumped from moving trains after realising they hv boarded a wrong train. @fpjindia pic.twitter.com/JZS4yFcmPV

As the passenger lost his balance, the cop, who was standing on the platform, swung into action and pulled him away from the tracks. The visuals show that the speed of the train was high due to which the duo lost balance and were about to fall on the tracks. However, the RPF personnel immediately pulled them away from the train and prevented a mishap. The passenger received minor injuries. RPF Constable in Odisha Saves Woman Passenger From Running Over by Train at Bhubaneshwar Railway Station; Watch Video.

If the RPF cop had not been at the Kalyan railway station, the father-son duo, who jumped from the train, could have sustained grave injuries or even died after being crushed in the gap between the train and the platform.

(The above story first appeared on LatestLY on Jul 28, 2020 07:35 PM IST. For more news and updates on politics, world, sports, entertainment and lifestyle, log on to our website latestly.com).