The errors were discovered when the cross-checking of data was done by the officers. 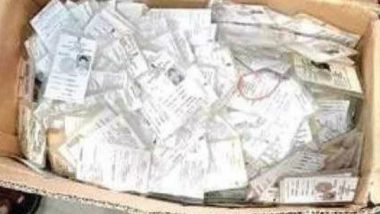 Lucknow, August 25:  Durgawati Singh living in Vivekanand Colony was shocked to see the photo of Bollywood star Sunny Leone against her name on the updated voter list. One Kunwar Ankur Singh's name in the list had a photo of a deer. Other names on the updated voter roll contained photos of pigeon, African jumbo and other animals against their names. A day after news of updated voter list of people living in Uttar Pradesh's eastern district of Ballia showing pictures of animals came to light, Ballia Additional District Magistrate has clarified saying that it is now clear that the 'mismatch' took place because of the operators. He added that responsibilty has been fixed in the case.

The Additional District Magistrate said that operator Vishnu Dev Verma, the main suspect in the case, has been arrested. Check the ANI tweet below to read the full statement of Ballia's ADM on the voter card name photo mismatch:

We found out on Aug 15 that voter IDs of around 7-8 voters are tampered with & their photos have been replaced with those of birds & animals. It was clear that this has been done by one of our operators. Operator Vishnu Dev Verma was arrested:Ballia Additional District Magistrate pic.twitter.com/RDrLKe2bEw

The whole incident was reported after one such list was leaked to the media. Voter lists are being updated in Uttar Pradesh before the 2019 Lok Sabha elections. Booth-level officers, who are appointed by the district administration are responsible for providing the data for the lists. The errors were discovered when the cross-checking of data was done by the officers.

(The above story first appeared on LatestLY on Aug 25, 2018 01:31 PM IST. For more news and updates on politics, world, sports, entertainment and lifestyle, log on to our website latestly.com).